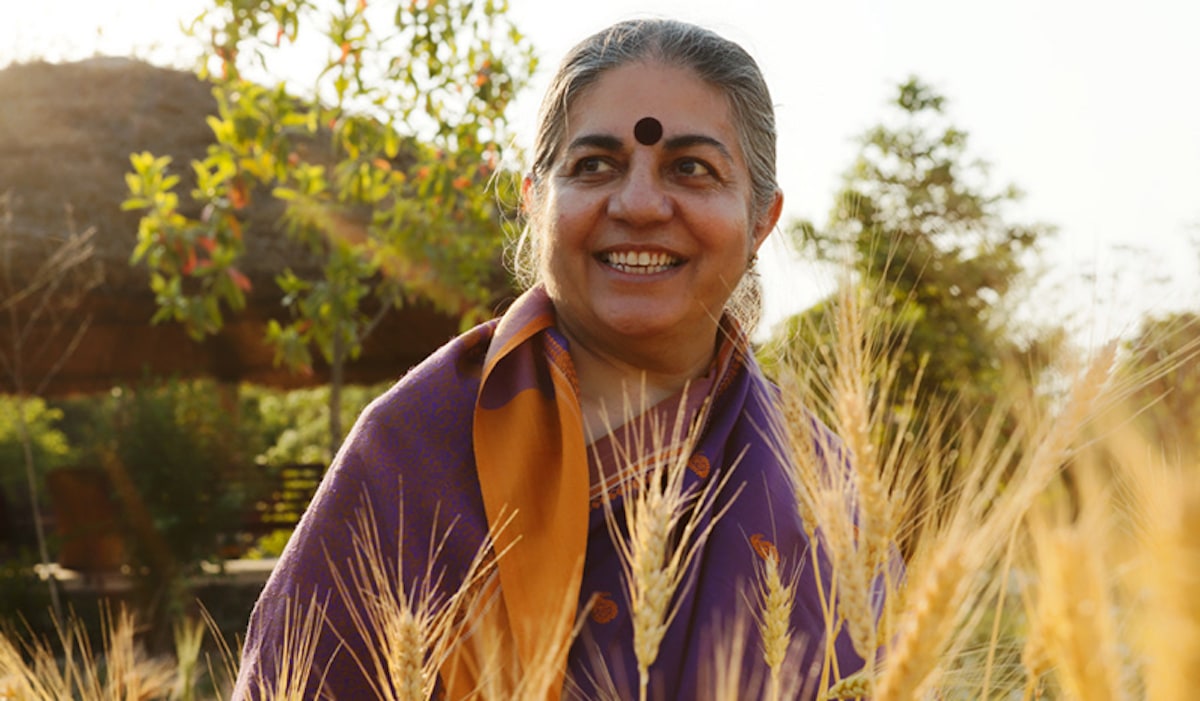 Dr. Vandana Shiva trained as a physicist at the University of Punjab, and completed her Ph.D. on the "Hidden Variables and Non-locality in Quantum Theory" from the University of Western Ontario, Canada. She later shifted to interdisciplinary research in science, technology and environmental policy, which she carried out at the Indian Institute of Science and the Indian Institute of Management in Bangalore, India.

In 1982, she founded an independent institute – the Research Foundation for Science, Technology and Ecology in Dehra Dun – dedicated to high quality and independent research to address the most significant ecological and social issues of our times, working in close partnership with local communities and social movements. In 1991 she founded Navdanya, a national movement to protect the diversity and integrity of living resources – especially native seed – and to promote organic farming and fair trade. For last two decades, Navdanya has worked with local communities and organisations, serving more than 500,000 men and women farmers. Navdanya’s efforts have resulted in the conservation of more than 3000 rice varieties from across India, and the organisation has established 60 seed banks in 16 states across the country. In 2004, Dr. Shiva started Bija Vidyapeeth, an international college for sustainable living in Doon Valley in collaboration with Schumacher College, U.K.

Dr. Shiva combines sharp intellectual enquiry with courageous activism, and her work spans teaching at universities worldwide to working with peasants in rural India. Time Magazine identified Dr. Shiva as an environmental "hero" in 2003, and Asia Week has called her one of the five most powerful communicators in Asia. In November 2010, Forbes Magazine identified Dr. Shiva as one of the Seven Most Powerful Women on the Globe.

Dr. Shiva has contributed in fundamental ways to changing the practice and paradigms of agriculture and food. Her books The Violence of the Green Revolution and Monocultures of the Mind pose essential challenges to the dominant paradigm of non-sustainable, industrial agriculture. Through her books Biopiracy, Stolen Harvest, and Water Wars, Dr. Shiva has made visible the social, economic and ecological costs of corporate-led globalisation. Dr. Shiva chairs the Commission on the Future of Food set up by the Region of Tuscany in Italy, she is a board member of the International Forum on Globalisation (IGF), and a member of the Steering Committee of the Indian People’s Campaign Against the WTO.

Dr. Shiva has made significant contributions to the areas of intellectual property rights (IPRs) and biodiversity. Through her leadership and commitments, Dr. Shiva and her team at the Research Foundation for Science, Technology and Ecology successfully challenged the biopiracy of Neem, Basmati and Wheat. Besides her activism, she has also served on expert groups of the government on biodiversity and IPR legislation.

Dr. Shiva has campaigned internationally on issues surrounding biotechnology and genetic engineering. She has helped movements in Africa, Asia, Latin America, Ireland, Switzerland and Austria with their campaigns against genetic engineering. In 2003, when the U.S. initiated a dispute against the EU to remove the bans and moratoria on genetically modified crops and foods, Dr. Shiva launched a global citizens campaign on GMOs in the WTO.

Dr. Shiva’s contributions to gender issues are nationally and internationally recognized. Her book Staying Alive dramatically shifts popular perceptions of Third World women. She founded the gender unit at the International Centre for Mountain Development (ICIMOD) in Kathmandu, and was a founding board member of the Women Environment and Development Organization (WEDO). Dr. Shiva has also initiated Diverse Women for Diversity, an international movement of women working for food and agriculture. The movement was launched formally in Bratislava, Slovakia, in May 1998.

Dr. Shiva is on the National Board of Organic Standards of India. Dr Shiva was appointed to the advisory board of the National Controller General of Accounts from 2013 to 2015. She also works with the state governments of Kerala, Madhya Pradesh, Bihar and Uttaranchal for the promotion of organic farming. She has been invited by the Planning Commission to be a member of the expert group on environment, the expert group on nutrition, and the expert group on the voluntary sector.

Internationally, Dr. Shiva serves on Prince Charles’s expert group on sustainable agriculture, and she is a member of President Zapatero’s Scientific Committee in Spain. Dr. Shiva advises governments worldwide, and is currently working with the Government of Bhutan to make Bhutan 100 percent organic. She is also working with the governments of Tuscany and Rome to create a hopeful and livable future for young people in these times of crises.