The Housatonic River estuary is typical of many urbanized watersheds in CT with many possible sources of contamination.  Metal contamination of river sediments resulted from wastewater discharges from the brass manufacturing industries located within the watershed from the 1700’s well into the 20th century.  More recently, industries including Chromium Process (Shelton), Whyco Finishing Technologies (Thomaston), Quality Rolling and Deburring (Thomaston) and NRG Devon Operations Inc. (Milford) have been identified among the 35 major toxic (zinc, nickel, copper and chromium) wastewater dischargers in CT.   Increased monitoring is necessary to allow for a better understanding of the impacts of historic and recent industrial discharges on the sediment quality of the Housatonic River estuary.  Results of this study will allow for an assessment of the extent of sediment metal contamination within the river/estuary.  This knowledge is critical for assessing current and future impacts of contaminated sediments on commercial activities and living marine resources within the watershed.  The goal of this study will be to test the following hypotheses: (1) physical properties of the river and harbor sediments will vary from fine-grain, high organic matter content in the inner reaches of the Housatonic river to coarser, low organic matter content in the upper reaches of the river and outside the estuary in LIS and (2) metal contamination will be highest in fine-grained high organic matter content sediment proximate to point sources of contamination. 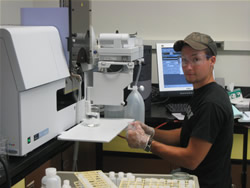 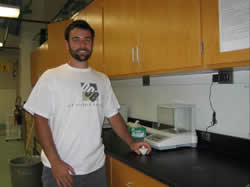 Previous research has shown that surface sediment metal contamination is highest in the western portion of Long Island Sound and gradually decreases towards the east.  Results of previous research conducted by CCMS faculty and students shows that the trend is also apparent in harbor sediment for large harbors located along the Connecticut shoreline (Norwalk – New London).  To further investigate trends in surface sediment metal concentrations in coastal harbors two similarly sized, yet demographically different, harbors in Milford and Clinton were selected for comparison of sediment metal concentrations.  It is hypothesized that Milford harbor, the more urbanized and industrialized western harbor, will have higher sediment metal contamination than the more rural harbor in Clinton.  Multiple sources of metals are apparent for both harbors and include storm water runoff, tributary rivers, and industrial effluents.  Both harbors also support recreational and commercial boating and fishing.  High spatial resolution sampling using a ponar grab has been conducted in each harbor and harbor sediment is being analyzed for copper, zinc, iron, lead and loss on ignition. 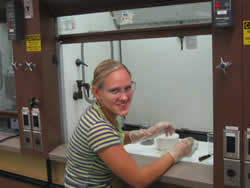 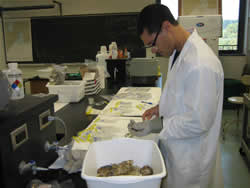 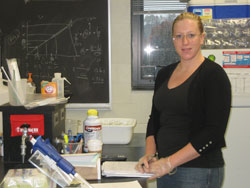 The West River, a tidal tributary of Long Island Sound, once a salt marsh, was eradicated as such to create an upland recreational area.  One-way flapper tide gates were installed at the southern end of what would become the West River Memorial Park to drain the park and prevent tidal exchange.  A long straight channel was dredged through the length of the park to create a reflective pool of West Rock, reminiscent of that in front of the Washington Monument.  Dredge spoil was deposited on the marsh to create the recreational area and together with the restricted flow of saline water by the tide gates eradicated the salt marsh in the park.  This resulted in an ecologically disturbed wetland, dominated by common reed (Phagmites australis) forming visual and physical barriers to the water.  Additionally, reduced water flows, increased stormwater flows, accumulating pollutants and fluctuating dissolved oxygen levels in the water column have severely impacted habitat quality.  Efforts are underway to restore the original salt marsh by reopening the tide gates and restoring tidal flushing.  Water quality monitoring prior to restored tidal flow is necessary to establish seasonal changes in baseline water quality and to judge the efficacy of restoration efforts.  SCSU students, in partnership with Save-the-Sound, are conducting a water quality monitoring program to include temperature, salinity and dissolved oxygen concentrations at five stations in the West River Memorial Park. 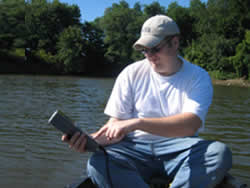 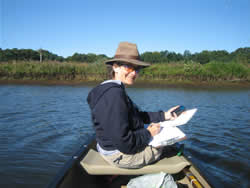 Project Description
Hypoxia, low levels of dissolved oxygen in the water column, may negatively influence the oyster population in LIS by limiting or degrading habitat and affecting larvae survival.  A critical factor influencing the duration and extent of hypoxic conditions is that atmospheric oxygen in the surface water is inhibited from penetrating to the bottom because the surface waters are warmer (less dense) during the summer months -- approximately June through September.  This summertime water column stratification is caused by large energy inputs through the surface combined with a reduction in wind-induced mixing.  Solar energy onto LIS is the primary cause of warmer surface waters. 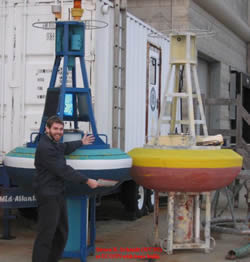 To supplement the existing energy budget monitoring program and provide specific information relevant to the Norwalk Harbor region, a suite of radiometers (pyranometer, pyroheliometer and pyrgeometer) with a solar tracker will be place on a convenient rooftop near Norwalk Harbor.  Use of a fixed solar tracker system allows derivation of all-sky cloud fraction (Long and Ackerman, 2000) to characterize cloudiness in addition to solar energy input.  The amount of solar radiation penetrating into the water will be estimated using the method of Payne (Payne, 1972).With the assistance of an undergraduate student researcher, data will be logged and processed on-site, then made available to researchers and the public.  Data analysis will include assessing the strength of the correlation between solar energy inputs and the near surface/subsurface water temperature difference at the Norwalk Harbor and western MYSOUND buoy locations.

Dwight Smith, Biology, SCSU
Project Title: Behaviors and Behavioral Ecology of the Monk Parakeet in Connecticut: Constructing an Ethogram for this Species

Project Description
Summer 2008 project was a continuation of our long-term studies of the monk parakeet as an urban species in shoreline towns of Connecticut.  The specific focus of this study was a comprehensive documentation of the behavior of this species in the urban habitat.  Aspects of this study included (1) identifying and in some cases naming different behaviors (2) describing each of the identified behaviors in detail to provide a comprehensive catalog/dictionary/ glossary of these behaviors that might serve as a baseline for all future studies of this species in North America and elsewhere across the globe and (3) obtaining a time activity budget of this species in terms of its changing behavioral activities throughout a diel period of time (4) document behaviors associated with different daily activities such as nest building and maintenance, foraging, care of the young, and interactions with other species.  The last is of considerable importance because the monk parakeet has been criticized because of its role as a competitor of other urban wildlife species.

Results to date/Significance
Data was collected via direct surveillance using snapshot focal sampling regimens to obtain an unbiased estimate of time activity behaviors and the frequency of these behaviors. We also used video photography to photo document both frequency and details of behaviors. By the end of the summer study we accumulated a film library consisting of hundreds of hours of monk parakeet activities filmed at all times of day and under all weather conditions.  Our current focus is to digitize these video clips to permit detailed analysis and reconstruction of each behavior. These can then be reviewed and summarized to provide an accurate baseline model of the timing, sequence, and architecture of each behavior in the explicit context (e.g., time of day, biotic and abiotic components) and purpose associated with each behavior. This information is being used to construct the first ethogram (a catalog of behaviors) for this species. It is anticipated that the completed catalog will serve as the standard reference dictionary for this species and provide the reference base for all future studies of monk parakeets.

Project Description
Research was completed to determine the age of American lobster (Homarus americanus) in the Gulf of Maine (GOM) from multiple orbital carapace lengths (mm).  The purpose was to document the age and levels of the aging pigment lipofuscin in lobsters from the GOM. It also will aid in the management of this resource.  Recent studies on western rock lobster (Panulirus cygnus) indicate that the aging technique proposed in this research would allow independent assessment of population parameter estimates and has shown that most juvenile lobsters are 3-5 years old immediately prior to recruitment (Sheehy 1998).  Another study on the European lobster (Homarus gammarus) yielded reproducible catch age structures with year-class resolution.  In addition, a recent study performed on the European Lobster demonstrated that lipofuscin quantification produced more accurate estimates of age in the species than carapace length (Huglem et. al. 2005).  This finding has important implications for stock assessments that employ traditional models which include age as an input parameter (Sheehy 1996).  We are on our second year of data collection to determine if lipofuscin concentrations change with season and between years.

Results to date/Significance
We are in the process of completing this project and anticipate in total at least two manuscript.  In short, we have continued isolating tissue samples from the esophageal ganglia of Gulf of Maine lobsters. 204 lobsters were collected for us from the Gulf of Maine by the Maine Department of Marine Resources. Laboratory processing, clearing and fixing of tissues, and confocal microscopy has taken place at SCSU to determine lipofuscin levels in the neural tissue of 115 lobsters sampled.  Up to five sections (5-7mm) of the cell mass was analyzed for each lobster.  Each of these sections quantify the percent of the olfactory lobe cell mass occupied by lipofuscin, the density of lipofuscin granules in the olfactory lobe cell mass, and the mean diameter of the lipofuscin granules.  Data collected with this research is being compared to data collected on known-age lobsters by the Connecticut State Department of Environmental Protection, lobster biologist Colleen Giannini.  This comparison will help to delineate the potential age classes of the lobsters collected.

One graduate Master’s thesis for Colleen Giannini has been completed because of the funds provided by the center, this project and outside monies. 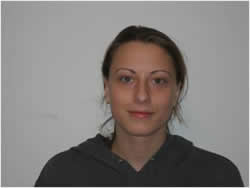 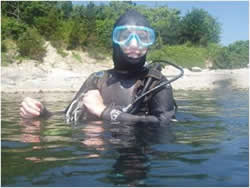 Project Description
Attachment strength (= tenacity, force to dislodge, holding strength) may be affected by closeness of thalli (Carrington 1990; Johnson 2001; Wernberg 2005).  Forces within algal canopies are due not only to hydrodynamic drag on individual thalli, but also the result of physical interactions within the surrounding canopy.  Johnson (2001) concluded, increases in density of the canopy cause decreases in the forces experienced.  Similarly, Koehl and Wainwright (1977) found detached giant kelp, Nereocystis luetkeana, tangled with other Nereocystis had torn off the substratum at their holdfasts. These phenomena are also noted in other species including corals (Grace PhD dissertation), barnacles (Bertness and others1998) and mussels (Bell and Gosline 1997).  For example, coexisting species of mussels differ in attachment strength due to direct competition for space (Bell and Gosline 1997).

The objectives of this study were:

Results to date/Significance
A significant difference in holding strength is shown in groups compared to individuals. 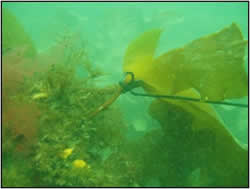