Project Title: Mercury and Cadmium in the Sediment and Oysters in the Housatonic River Estuary 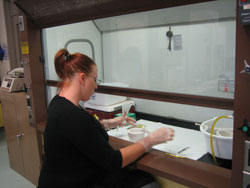 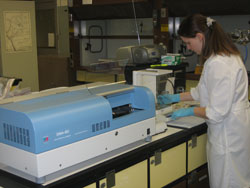 Previous research has helped leverage a $278,000 grant from the U.S. Department of Agriculture entitled Recovering the Economic Viability of the Connecticut Oyster Fishery.  Faculty members of the Center for Coastal and Marine Studies along with affiliated faculty at other CSU campuses co-authored the proposal.  An important aspect of the proposal is the characterization of the benthic habitat in areas were oysters are currently being raised and in areas that offer the potential for development of new beds.  Two primary goals in habitat characterization are 1) is the sedimentary environment conducive to oyster populations, and 2) do the sediments have the potential for sequestering high concentrations of heavy metals that could enter the food chain via oyster bioaccumulation.  Generally speaking, oysters prefer sandy bottoms (or accumulations of oyster shells) and heavy metals are preferentially sequestered in muds.  Two methods are used in conducting benthic habitat surveys.  On is grab sampling from a ship or boat and subsequent grain size analysis using laser diffraction, which allows for rapid analysis of numerous samples.  The other is the use of side-scanning sonar and correlation of sonogram reflectivity with physical sediment samples obtained from the same area. Coarse-grained sediments are much more reflective, and fine-grained sediments are more absorbent, of the energy produced by the sonar.  This difference is visually portrayed in the side scan record as variations in gray-scale.

Previous research has shown a direct correlation between heavy metal concentration and loss-on-ignition (LOI), a proxy for organic content, in sediment samples.  It has also shown an inverse correlation to sediment grain size.  It would be valuable to understand the expected relationship between metal concentrations and the two factors listed above so that the role of contaminant sources could be more clearly understood.  If sediments in a particular locale are heavily contaminated, is it because of factors such as organic content and grain size, or might it be source proximity and rate of flux?  Numerous samples from various locations along the Connecticut coast are being analyzed for metal concentration, LOI, and grain size.  This data is to be subjected to multivariate correlation in order to quantify and explore this relationship.  If good correlation is found, then outliers might be assumed to be source-related.