The CT river contributes about 70% of the total upstream load of most pollutants to LIS.  Many New England towns and cities have a long history of industrial activity and legacy deposits of contaminants in upland watershed sediments continue to be a strong source for LIS.  During high river flows, water velocities are sufficient to re-suspend sediment-associated contaminants and deposit them downstream in another reach of the river.  The recent CT river flows associated with tropical storm Irene in August 2010 transported tremendous volumes of sediment to the mouth of the Connecticut river.  Fine-grain, metal rich sediment containing legacy pollutants are remobilized during flood events and deposited preferentially in sheltered coves along river estuaries.  Research has shown that the marsh and cove sediments in the tidal areas of the Housatonic river estuary are strongly enriched in Hg, Zn and Cu remobilized by floodwaters from upstream deposits.  As such, the chemical and physical characteristics of tidal cove sediments in the lower CT river estuary will be a focus of this study.  This study will test the following hypotheses: (1) physical properties of the river channel and cove sediments will vary from fine-grain, high organic matter content in the river coves to coarser, low organic matter content in the river channels and outside the mouth of the river in LIS; (2) metal contamination will be highest in fine-grained high organic matter content sediment proximate to point sources of contamination; and (3) metal contamination, particularly in the river coves, throughout the lower CT river estuary will be greater than both their respective crustal abundances and the extent of metal contamination in sediment sampled from LIS. 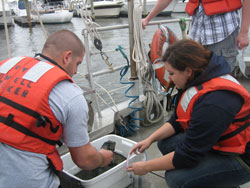 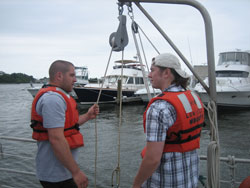 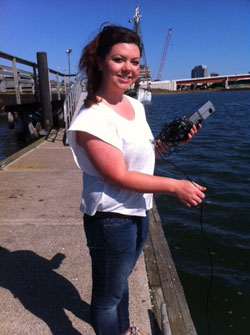 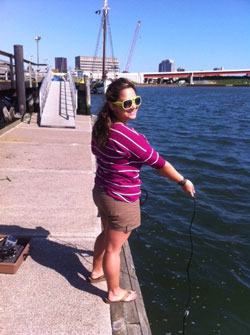 Project Description
Connecticut is a coastal state with one of the most developed shorelines (% of shoreline length) in the nation.  Although Connecticut has a long maritime history, most Connecticut residents do not feel a strong connection to the arm of the sea known as Long Island Sound.  This is, in part, because of lack of access.  Most of the shoreline is private or confined to use by citizens of particular municipalities.  As a result, there is a lack of awareness of and concern for the issues facing Long Island Sound.  Hammonasset State Beach is one of the places where the people of Connecticut can make positive connections to the Sound and, in addition to being a source of recreation, is important for that reason.

Beach and dune erosion has been an issue at Hammonasset since the 1920s, particularly at the west end of the beach.  Six storms in recent years (1989, 1991,1992, 1993, 1996, 2000, and 2011) have resulted in extensive boardwalk repair according to a study conducted for the D.E.P. by Fuss and O’Neill and the Woods Hole Group.  The report notes that erosion is particularly intense along the west end of the park with erosion rates averaging 1 foot per year between 1983 and 2007.  The study indicates that erosion has increased to as much as 2 feet per year during the last 33 years.  Tropical Storm Irene (2011) resulted in loss of the West Beach bathhouse and the west beach boardwalk.  Current thinking on the park of the D.E.E.P. and their consultants is that beach sand is being carried to the east end of the 2-mile beach from the west end of the beach by tidal currents.  Based on preliminary studies, we believe this is incorrect and that most of the eroded beach sand has been carried offshore and deposited in low, broad underwater bars where it remains for long periods of time.  We are testing this hypothesis by surveying the topography of the beach and nearshore using the laser-based surveying instrument.  These measurements will be used to 1) confirm the existence of the bars, 2) compute the total volume of the sand in the bars, and 3) recommend to the state cost-efficient mitigation procedures for maintaining the west beach as a viable resource, notably returning the sand to the beach via a slurry pump.

The relationship between grain size, loss-on-ignition, and metal concentrations are being compared for several Connecticut harbors, including Norwalk, Bridgeport, and New Haven to determine how the regression equations vary as a function of harbor.  It is expected that factors such as industrialization of the harbor and contamination of the watershed, and levels of contamination in harbor sediments will affect the numerical relationship between these factors.  In harbors of similar contamination, the regression equations should be similar.  In harbors of dissimilar levels of contamination, the y-intercept as well as the slope may vary. 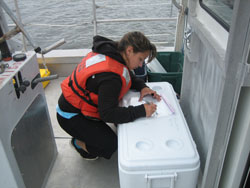