The emphasis we have on experience-based learning results in high rates of post-graduate employment. Our alumni work. One look at the staff directory of any of the award-winning theaters in the near region will reveal Southern grads. Recent graduates have gone on to jobs in film and television, education, regional theater, and New York theater. They are actors, producers, stage managers, teachers, make-up artists, ballroom dancers, marketing directors, event managers, designers, and technicians. They have also gone on to top-tier graduate programs in arts management, educational theater, film studies , playwriting, and design. 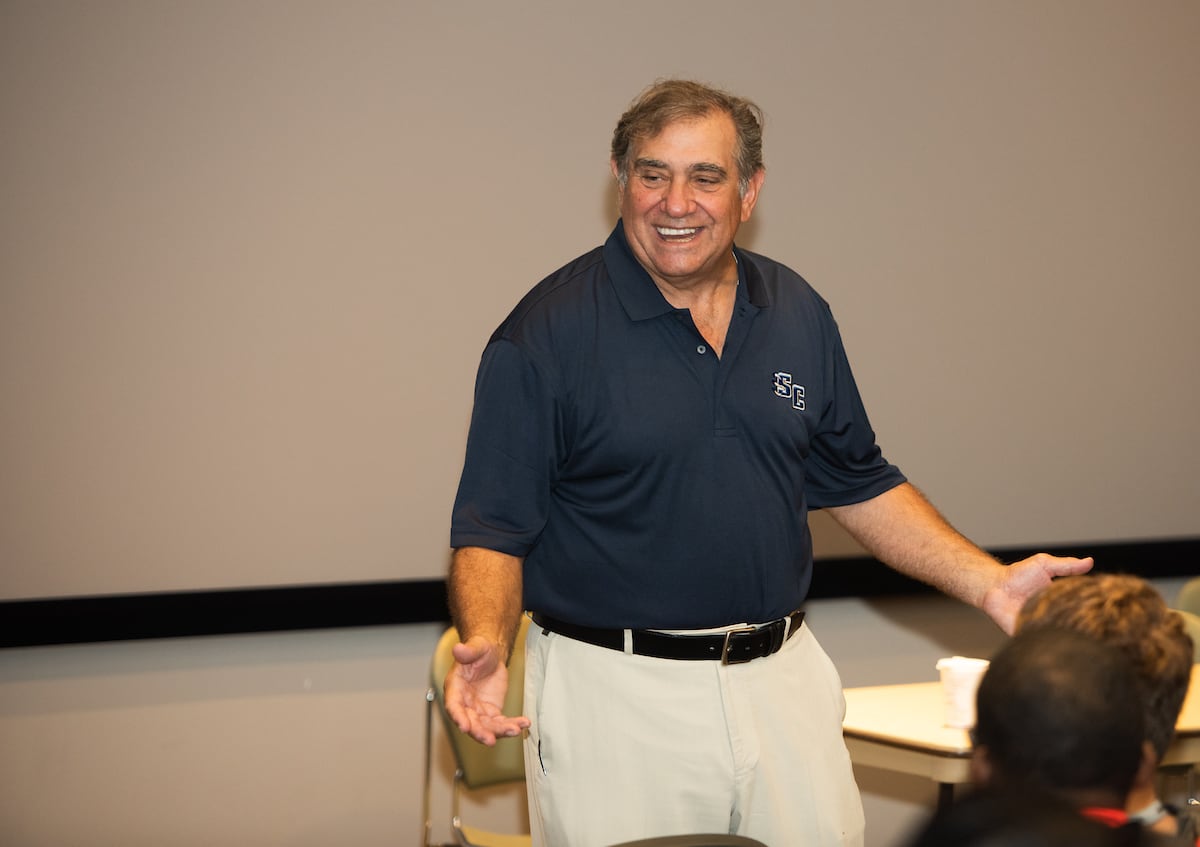 He's played Salman Rushdie on "Seinfeld," Judge Swan on "Ally McBeal," a dark priest on "Charmed," and Ali Nissir, the Qumari United Nation's Ambassador, on "The West Wing."  Indeed, there are likely few avid fans of the big and little screens who haven't seen Tony Amendola perform.  Among his film and television credits are performances in "Dragon Quest," "Blow," "The Cradle Will Rock," "The Cisco Kid," "Alias," "The Practice," "The X-Files," "Star Trek: Voyager," and "Judging Amy."

Gracy Brown (1998)
A former president of the Crescent Players, Gracy Brown has worked on many productions with The Godlight Theatre Company, which was founded by alumnus Joe Tantalo.  Brown performed her first professional role in "The Good Person of New Haven," at the Long Wharf Theatre, playing multiple parts and understudying and performing the lead.  She went on to work at the Cornerstone Theater Company, performing in "For Here or To Go?" at the Mark Taper Forum and playing the adult Wendy in "Peter Pan."

Carleigh Cappetta (2008)
Theater has become an integral -- and integrated -- part of life for this versatile young professional.  At Southern, Cappetta earned dual degrees in elementary education and theatre.  As a member of the Crescent Players, she assisted director William Elwood on the award-winning production of "Arsenic and Old Lace," which was showcased at the 2006-2007 Kennedy Center American College Theatre Festival.  She also received a LMDA/ATHE/KCACTF Dramaturgy Award Nomination for her work on Kathryn Schultz Miller's "A Thousand Cranes," and the Irene Ryan National Acting Scholarship Nomination for her role in Eduardo DeFellippe's "Saturday Sunday Monday."  In addition, she studied performance at Circle in the Square Theatre School and is the founder and co-director of The Cow Town Players Summer Theatre Camp in her hometown of North Branford, Conn.  She has brought all of her talents to bear on her current position as education associate for community-based programs at the Hartford Stage Company.

Norma Lee Chartoff (1980)
Norma Lee Chartoff has worked as a set designer and painter, prop designer, art director, production designer, casting and script consultant, adjunct professor, computer animator, and project manager.  She also has lent her talents to film, television, commercials, and theater.  She has co-owned Chartoff/Scott Studios with her husband, Chip Scott, since 1986.  She is the production designer of Theatreworks' "Haunted Hotel," an interactive amusement park event that is mounted by the New York City College of Technology.

R. Bruce Connelly (1971)
Hero to preschoolers everywhere (not to mention their caregivers!), R. Bruce Connelly has played Jim Henson's Muppet Dog, Barkley, on the Emmy Award-winning children's series "Sesame Street" for the past 14 years.  The New York City-based performer has earned extensive additional acting and directing credits.  Among his recent performances are title roles in "Uncle Vanya," "Scapino!," "The Man Who Came to Dinner," "The Music Man," and "The Matchmaker" at the Seven Angels Theatre in Waterbury.

Laura Jean Kirk (1994)
Acting is sometimes a family affair for Laura Jean Kirk who appeared in the national tour of the Pulitzer Prize-winning play "Wit" with Judith Light.  Kirk also toured with "To Kill A Mockingbird," and appeared in numerous regional productions, including "Courage," at the MCC Theater, "Wit" at the Ordway Center for the Performing Arts in St. Paul, Minn., and "A Midsummer Night's Dream," with New Haven's Elm Shakespeare Company.  Kirk also was a featured voice-over in the documentary film "into the Fire."

Dan Lauria (1970)
"I wouldn't be an actor today if it wasn't for the Crescent Players and Constance Welch," notes Dan Lauria.  "She overheard me telling a joke on the football field one day.  She needed a big, ugly guy to play Caliban in Shakespeare's 'The Tempest.'  I was cast and I've been acting ever since."  Having catapulted to fame as TV dad "Jack Arnold" on the Emmy-Award-winning ABC series "The Wonder Years," Lauria has enjoyed a successful career as an actor, director, and playwright.  He established the Playwrights Kitchen Ensemble in 1989 with Ken Kaufman and Tom Patchett to nurture and support new writers.

Janet Sarno (1955)
One of the first members of the Crescent Players, Janet Sarno has had a strong career, appearing in film, television, and theater.  Sarno, who went on to earn her master's degree at Yale School of Drama, has appeared on Broadway in "The Apple Doesn't Fall...," "Knockout," "Equus," and "Dylan."  She also has appeared in numberous films, among them, "Requiem for a Dream" with Ellen Burstyn, "The Hospital" with George C. Scott. "The People Next Door," with Julie Harris, and "Gorp" with Rosanna Arquette.

Semina De Laurentis
Having built a successful acting career on the West Coast, Semina De Laurentis, '71, returned to her hometown of Waterbury, Conn., with a mission: to establish a professional theater in the area. Inspiration became reality when De Laurentis took the helm as the artistic and managing director of the Waterbury-based Seven Angels Theatre, named in honor of the seven family and friends who founded it. Today, Seven Angels is 14 years old, drawing some 50,000 people to its 200 performances each year. In 1999 the Connecticut Critics Circle presented De Laurentis with the prestigious Tom Killen Award for her artistic direction of the theater and for her extensive community outreach efforts.

Abby Boone: 2011, Worked at Weston Playhouse, works at The North Shore Music Theatre including productions of King and I, Legally Blonde and A Christmas Carol.

Laura Folker: 2008, Development manager at International Festival of Arts & Ideas.  2011, Events coordinator at the Carol Autorino Center for the Arts and Humanities at Saint Joseph College.

Molly Leona: 2011, Actress in Play With Matches at A Broken Umbrella Theatre.

Matthew Griffith: 2008, Production of Back to the 80's at Whitney Players.  2009, Assistant director at Ivoryton.

Josh Wills: 2008, Actor for the Elm Shakespeare Company.  2009, Hartford Stage and actor in The Happy Prince at Long Wharf Theatre.

Alisha Martindale: 2008, Ensemble and costumes for the production of Back to the '80s at Whitney Players.

Rebecca Welles: 2008, BA in Theatre and Psychology.  Working in costume shop at Yale. Receiving MFA from Yale in Design May 2012.  Will be freelancing as a costume designer out of NYC upon graduation.